Solar powered ferries are now a reality in Kerala, India with the state’s Water Transport Department (KSWTD) agreeing to use them to transport commuters along the backwaters of Kerala’s Alappuzha district.  ADITYA, India’s First Solar Ferry, is the largest solar-powered boat in India.  The vessel was designed by NavAlt Solar and Electric Boats, built by Navgathi Marine Design and Constructions in Kochi, India and was tested on November 16, 2016.  It is expected to be inaugurated in December, 2016.(1)

These silent boats will run on solar energy, and the cost of operating them is expected to be negligible in comparison to the diesel ones used presently. The 20-metre long and 7-metre wide boat is covered by 140 m2 of solar panels rated at 20 kW, which in turn connect to two electric motors of 20 kW, one in each hull. There are 700 kg of Valence lithium-ion batteries in the ship’s two hulls with a total capacity of 50 kWh. (1) Two systems on either side of the boat (in each demi-Hulls) are electrically independent to ensure redundancy in case of system failure in one. Even if one system fails the power is available to safely cruise to shore with other. 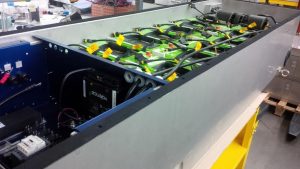 The battery bank is designed based on:

An additional step is required in design of power train of solar ferries. Unlike a cruise boat that runs for three to four hours a day, ferries need to run for six to 10 hours a day. This means that the batteries, motors and systems are of higher reliability and efficiency. Usually batteries are lithium based (iron magnesium phosphate being safer) with battery management system as is the case with Valence batteries.(4)

These ferries will be powered by solar energy making it completely pollution free unlike their diesel counterpart. And unlike diesel engines, they’re completely silent.  The normal operating speed is 5.5 knots (10 km/h) to achieve a 15 minutes travel time between Vaikom and Thavanakkadavu, a distance of 2.5 km on water, but can reach speeds of 7.5 knots because of the shape of the hull.(1) 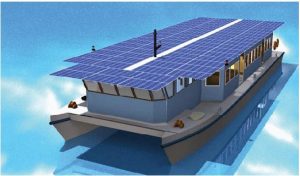 “We have introduced it on an experimental basis. Once it becomes successful, we will implement it on other routes as well. It will be great if we can completely replace the diesel ferries with the solar ones but all that will depend on several factors and will take a lot of time,” Joseph Xavier from KSWTD said.(3)

NavAlt Solar and Electric Boats is a joint venture firm between Navgathi Marine Design and Constructions, Alternative Energies (France) and EVE Systems (France). The core technology and expertise for design and construction of the boat was provided by the French firms.(1)  Valence Technology is proud to be the manufacturer of the lithium ion batteries used in India’s first solar powered ferry and India’s largest boat equipped with lithium battery storage.