Recent independent degradation tests of commercial lithium batteries reveal a big surprise! Contrary to the claims of many NMC-based lithium battery manufacturers, LFP chemistry is superior compared to NMC – it is safer, offers a longer lifespan, and is generally less expensive than NMC, NCA.
…

According to a 2020 paper from the Journal of the Electrochemical Society (Degradation of Commercial Lithium-Ion Cells as a Function of Chemistry and Cycling Conditions), LFP batteries have a longer lifespan than NMCs. This data contradicts the wide-spread notion that NMC cells are more durable and have a longer life span.
… 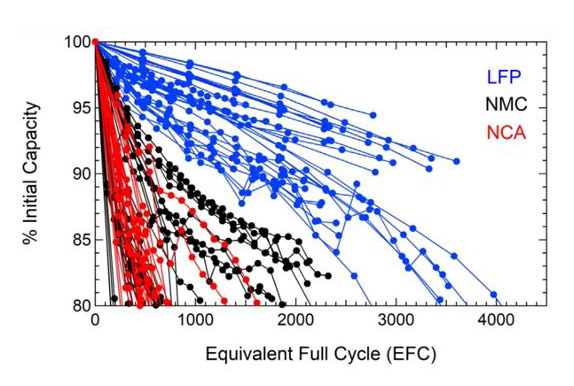 According to the paper, “The LFP cells exhibit substantially longer cycle life spans under the examined conditions.” The tests were performed at the Sandia National Laboratories as “part of a broader effort to determine and characterize the safety and reliability of commercial Li-ion cells.” The study examined the influence of temperature, depth of discharge (DOD), and discharge current on the long-term degradation of the commercial cells. All cells were charged and discharged at a 0.5 C rate or the amount of discharge that will deplete the full capacity of a battery in two hours. In the graphical representation shown (taken from the Journal’s 2020 technical paper), you can easily see that the discharge capacity retention for the LFP lithium battery (blue data points) far exceeded the NMC battery retention (indicated by the black data points) for each round of charge/discharge cycling. The graph indicates that the NMC degrades almost twice as quickly as the LFP, showing the superior overall performance of the LFP cells.